There are so many firsts, first time he crawls, walks, eats food, smiles, says mama, first birthday and first day at daycare. But this past weekend so many of us had our first mother’s day.

Mine was perfect. Not only did Lincoln sleep until 8am (!!!!) but when we went downstairs Zack had prepared an amazing breakfast with my favourite foods. Waffles & Bacon. And then to be honest, the day wasn’t that much different than every other weekend. We went for a walk in the park, hung out with family and took as many snuggles as Lincoln would give us. Weekends are gold to me- time that we get to spend all together- so every single one is fun, this time I just got a couple cute presents and a special breakfast. I don’t think I’m ‘lucky’ to have a partnership where we both put equal effort and time into making sure we have time together, alone, with each other; because we’re in this together. My expectation was that that’s the way life would work- I wouldn’t settle for any other way. Zack always encourages me to have time to myself, whether it’s just a quick workout, night out with friends or time to write this- and I do the same for him. So yes, my first Mother’s Day was fantastic, but I hope next Saturday is just as great.

but I did get this magnet that I think is pure gold. 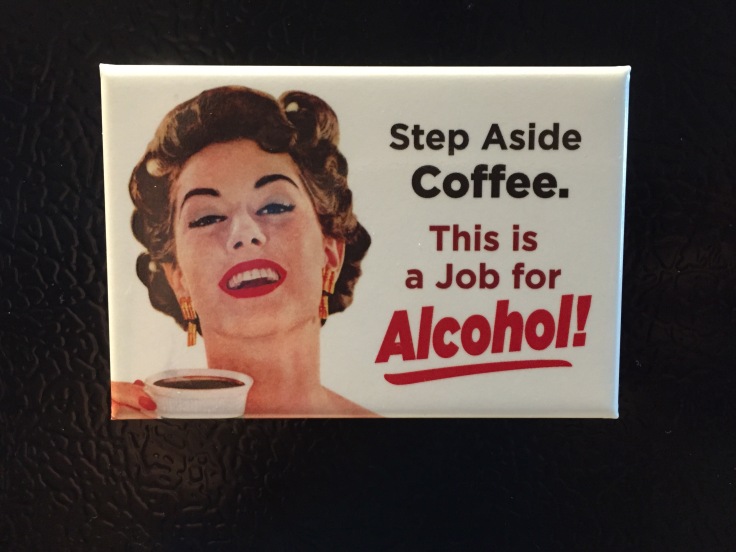 I also understand all the articles that are empathetic to those women who wish they were mothers and aren’t, for various reasons. I get it, I understand and I’ve been there. When Zack and I had a miscarriage… I literally just lost my words. I can’t even put it into words right now- the loss was so immense, my sense of self being was nothing.. I didn’t know my self worth because I equated it to giving Zack a family and I couldn’t do that. It started happening at work. I felt really nauseous, it was like major major period cramps. But when I looked it up, it said that was pretty normal. Some bleeding happened to like 80% of people in the first trimester. I had told a few close girlfriends we were expecting. As the day went on, the cramps got worse, by the time I got home I was almost doubled over in pain. I sat on the toilet and nothing much had changed so I just laid in bed. Zack was away for work so I just kept it to myself and took a nap. After an hour I felt a little better, I went to the bathroom, and it started happening. I just sat there, in disbelief, unsure, crying, scared, and then thinking- “this can’t be happening, this isn’t happening to us”. I called the hospital, explained what was going on and the emergency nurse told me to come right in but if I didn’t want to rush it was fine because ‘if it was happening, a couple hours wasn’t going to make a difference.’ I will never, ever, ever forget the feeling of calling Zack. He picked up, I was crying.

“I think I’m having complications with the pregnancy. I’m bleeding and it won’t stop”

“I’m going to wait here, the hospital said it was fine to wait until you’re home.”

and that was it. that was the moment I felt I had let him down, and would never fill that void. That night at the hospital was so long, so emotionally exhausting. Multiple doctors coming in, asking me the same questions, doing tests, then to say come back in the morning for an ultrasound so we can be 100% sure. I didn’t need that ultrasound- we were sure. The next morning in the ultrasound room, it was just me and the doctor and she said, “Chelsea, I’m sorry- but I don’t see any fetus in there, you’ll be passing it within the next couple hours to couple of weeks”. We went into another room and I just cried and cried and cried. The coming days emotions went from just feeling empty, to useless, to angry. The most logical response was from one doctor who said, ‘they baby wasn’t going to survive in the world. Your body miscarries when something so severe has taken over. It didn’t have a missing limb; it had a missing heart or brain. It wasn’t strong enough to survive.’ That helped, the understanding of his logic helped the pain. In time the pain did slowly dissipate, but it never vanished.  I still think about it. In my first trimester of this pregnancy I though about it almost every minute.

I get it. Mama’s who are ready and waiting who aren’t ‘Moms’ yet, I get it. And there are no words I can give you, but your strength and perseverance is remarkable, and maybe the story you had once written isn’t coming true, but there can still be a happy ending.

One thought on “the firsts.”