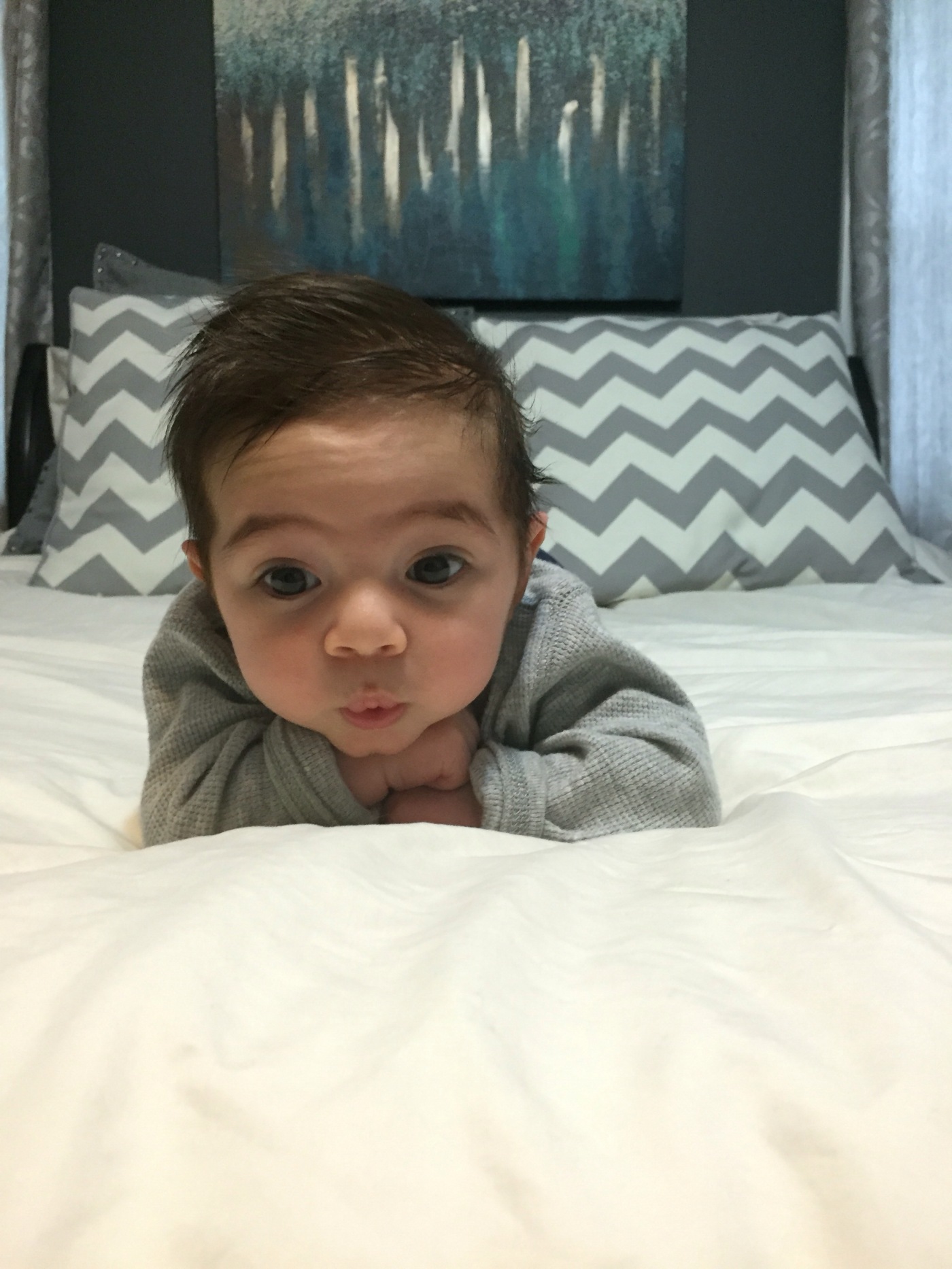 so we made the jump. we put the little rascal into his crib about 2 weeks ago. our progression looked something like this:

bassinet in the nursery room so we would get comfortable with him sleeping in another room and using the monitor.

bassinet directly in the crib as he wasn’t totally loving the crib when we would put him in it, so I thought this would get him more comfortable with his surroundings.

then we went to the crib. he hated it so we tried to make it as bassinet- like as possible. used the mat, used his same fleece blanket on top of the crib mattress, rolled some towels and put them under the sheet so he felt snuggled in. one by one these pieces disappeared. he’s also now rolling around so we needed to give him more room during the night.

and here’s where we’re at: crib v. sleep. he likes the crib but his sleep has changed. he is good & solid from about 8:30pm-3:00am and then it’s like taming a raccoon. (weird analogy) sometimes he is awake (like last night) at 3:30am and won’t go back down, sometimes he does right after a feed for another few hours and sometimes we give in and the only way he’ll go back to sleep is if we bring him back into our bed and let him sleep with us. so it’s the decision- do we choose more sleep and slowly lose the crib battle, or just keep trying to put him down and then not get sleep? chicken and the egg. The best is I keep saying oh when he’s a bit older he’ll just go to sleep, but then he keeps getting older and that doesn’t happen. So it’s been a tiring couple of weeks, anyone else playing the would you rather game; crib or sleep?

On top of that I’m still on #countdowntomiami  (only 17 days to go) so I’ve been swimsuit shopping. who thought anything was worse than jean shopping? well there is. it’s post pregnancy body swimsuit shopping. I want a full piece that doesn’t scream “I’m a mom and i’m trying to hide everything” but rather “I’m a mom that still wants to look good, be in shape and be fashionable” is that possible? I’m also having the struggle with having a long torso (I didn’t know I had one) and all the full pieces are majorly creeping up and pulling down, not a good look, makes me sort of look like a hunch back. But then I tried on bikinis; I ordered high rise bottoms thinking this would solve the problem. bad idea. so so very bad. It’s ironic, high rise are a great idea for covering some curves or areas you may want to cover, but ironically look best on a long, slim figure… awesome. I had on high rise bottoms with a little bit of a crop top bikini top and all this combination did was accentuate & compress a 4 inch roll  in the middle of my body. So the bathing suit issue has not been solved and it’s getting really close. Currently my bathing suit option is a pair of leggings and a tank top.

the last thing that’s been taking up some brain power is our first flight home. Lincoln and are I flying home to Ontario in April and I’m absolutely unbelievably terrified to fly with him alone for the first time. I’ve been googling what to know when flying with baby and have been reviewing the west jet website for any travel tips. I’m nervous about changing him on the flight in those tiny bathrooms, and what about if I have to pee? What if I can’t make it through the flight and I need to pump? What if he just goes ape shit and cries the whole time? Any suggestions, pointers? I’m assuming I can check my carseat right at the gate so that I have something to carry him in once I drop his stroller off at the luggage drop off? If you know me when I get flustered you know I’ll be knee deep in sweat, having to pee with the hugest red blotchy marks all over my body – great, can’t even play it cool. So if you’re flying to Toronto in April on a west jet flight and you hear a baby crying maybe come see if it’s me? what you won’t want to do is make any sort of sly remarks- the only thing worse than my blotchy skin when I get anxious is my quick tongue when someone says the wrong thing.

So it sounds like I’m still winning mom of the year right?